August turned six months old today. My wife and I had planned a European backpacking trip about 2 years ago for our honeymoon. We were just about to get married but knew we needed to save for a proper honeymoon.

Well August surprised us when my wife found out she was pregnant about 7 months before we were scheduled to leave. So I pushed the plane tickets back 5 months from the original date and we decided we’d just take him with us, so we did! We decided to stay in Norway instead of country hopping, but there was a lot to see there so we were very happy with the trip.

Here he is after 23 hours of straight traveling on the way home by trains, buses and planes! 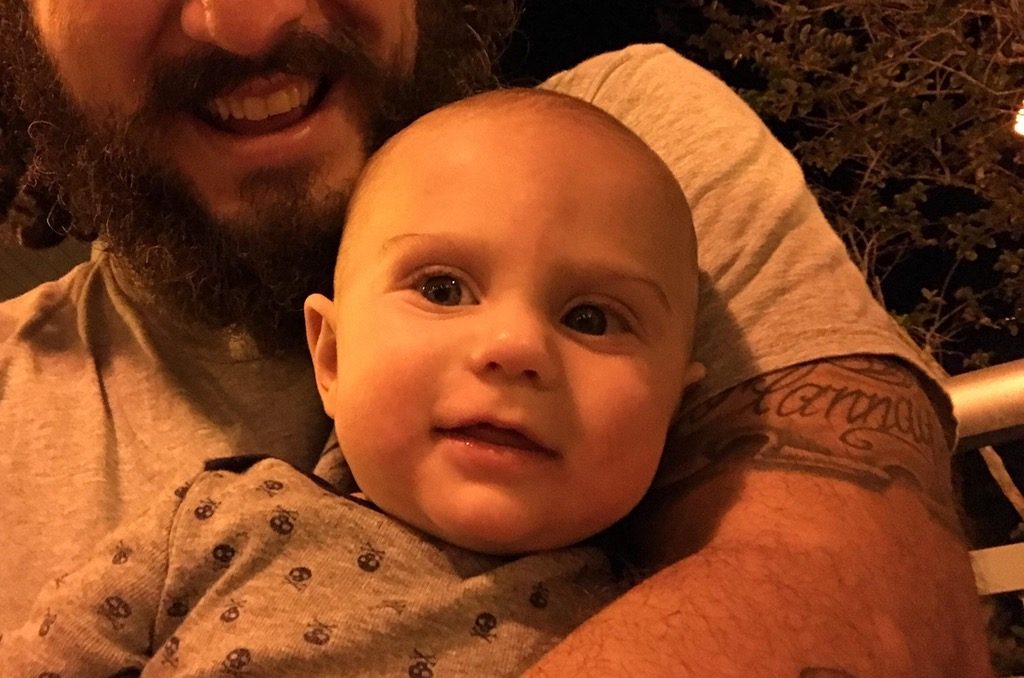 We wanted to travel light, no checked luggage if possible. Our carry ons were pushing it but they let us take them. They were the rolling luggage with pop up handle that is iffy size for carry on. We were prepared to pay and check them but were seriously hoping to save those funds. They did not let us bring them back, they told us at the gate they had to be checked but they let us do it for free since we were that far along. Also, I think having a cute baby strapped to you gets you some favors.

We used a baby carrier, an ergo. Babies do really well in these things for extended periods of time, for the most part, I know all babies are different so take all our tips with a grain of salt.

We packed enough diapers & wipes to get there plus a couple days. Check out your destination before hand. If it’s a 1st world country, diapers are fairly abundant.

We took 3 bottles, he uses a special kind that simulates the boob flow as he nurses most of the time. We do supplement with formula so we brought some formula as well, enough for 3 or 4 days. We didn’t research this well and should’ve seen what brands are available in Norway. Some babies are fickle about their formula. We were fortunate he liked what we found there just fine.

RESEARCH store hours. Norway has some odd hours for their stores and we didn’t even think about the fact we were travelling over Easter and they shut DOWN on Easter big time. For days… (google booze laws too if you want to have some drinks on your trip, Norway surprised us with the crazy nanny state alcohol laws).

Bring any meds you might need… we didn’t. My wife caught an awful cold towards the end of our trip and we super lucked out that neither August nor I got sick as well cause we’d have no idea what meds a baby could have and finding an open pharmacy on Good Friday was a royal pain in the ass.

Our son has been a bit spoiled with co-sleeping. We used airbnb’s for the most part and a hotel in one location. We brought a small packable walled baby bed that folds up. In the airbnb’s we left it in the bedroom and put him to bed so we could hang out in the living area.

The first night in a new place was always the same, he took and extra hour or more to get to sleep. But after that he adjusted well. In the hotel we put him in the bathroom… was quite funny sneaking in to take a pee as quiet as possible (my wife got good at toilet gymnastics to get the right angles for no splashing).

You can’t ride in cars without a car seat, don’t even think about how you can pull that off just plan around using busses, trains and plains. And babies ride for free! At least with Norwegian Air he did, I know some international make you buy them a seat.

I’m not sure if this is normal but our boy hates when you sit down with him in the carrier, so if it’s a 20-30 minute ride you will probably be standing in the train… which brings me to this point as well, you will be walking a LOT, like a whole lot, so make sure you are physically ready for that. And take a fitbit, you’ll be crushing all your friends on it.

Planes are the obvious big & scary challenge with an infant. We made a bit of a game plan and it worked well. We had a bottle full and ready for him to take right during take off as their ears can pop and chewing on something comforting helps them a lot.

We also kept him awake from his naps before the flight. He got pretty fussy but it paid off as he slept for the majority of the flights. Also, learn to relax. People expect babies to cry, it might be annoying but it’s going to happen so just do your best to keep them quiet and comforted but don’t lose your cool if the baby goes off some. Stay focused and do what you can to calm them down. If seat belts off, get up and walk around with them. Every tends to smile at the cute baby.

The relax thing is super important. After tons of walking and traveling for hours at points, you will be exhausted… so is baby! Stay cool, do your best to just comfort the child. Focus on the child as much as possible and not your own tiredness. Once the baby is calm, it’s like a huge cloud is lifted and everything else is easy.

My wife looked at me while we were in Bergen and said, “Huh, my throat just got scratchy out of no where.” We both blew it off as transitioning from hot humid Florida to dry cold mountain climate. But it only got worse. My wife has athletic asthma so it’s never really life threatening but if she runs for 20 minutes or so she has to have an inhaler or her throat constricts and breathing gets tough.

Well, she got bad… real bad. She was coughing like crazy and having trouble breathing just from picking up our son. We gave it a day to see if it was nothing serious but it only got worse. So the second night of it she reached a point where she was about to have a panic attack and at 11:00pm on Good Friday or maybe the night before (point is nothing was open and we knew no one) she made a trip to the E.R. in Norway.

Here’s what really makes us frustrated about the whole thing. They drew blood, listened to her lungs and kept here there for a couple hours just for the doctor to say she has the “Norwegian Cold” and time is all she needs to fix it. She can get some over the counter cough medicine for some relief and hit her inhaler once every four hours. Well she’d hit it and feel ok for about 45 mins to an hour then back to misery and trouble breathing and panic attacks, etc.

When we got back to the states she went to her doctor today and they said it was incredibly serious viral issues on top of her asthma and she needs to be having nebulizer sessions four times a day amongst some other treatments and a steroid. Very irritating how nonchalant the doctor was to her, almost making her feel stupid for even coming in. That said, they didn’t bill us a dime so that’s cool.

The impression we got was just to deal with it, so we did. We got on a regiment of cough drops, some weak cough syrup (the nation bans anything like mucinex completely) and a little whiskey/lemon/honey at night all topped with her inhaler once every four hours.

I was stuck with full responsibility for our son. I carried him at all times, I changed him, she still nursed though but doing anything physical at all would get her crazy winded, coughing and breathing issues. (So yea, thankfully we had some good “mom & dad” time at the beginning of the trip).

The last few days we didn’t much walking, we were very fortunate that we got to explore Oslo and Bergen a LOT before this got serious. We spent four nights in Flam near the end of our trip where everything was within 100 yards or so from the hotel. It’s a quaint mountain town with beautiful sites surrounding it, perfect for the situation.

We wouldn’t take the trip back for anything. I never knew I’d be bonding so much with my son, I feel like I know and understand him at a completely new level. He’s amazing and so is my wife. We went through heaven and hell together and we are only stronger as a family unit because of that. I highly recommend taking infants on adventures with you, just a bit more laid back adventures, but still a big time.

Here’s some family photos from the trip 🙂

ALBUM: Visiting where they filmed Hoth on our way back to Oslo at end of trip

1 thought on “International Travel With An Infant”