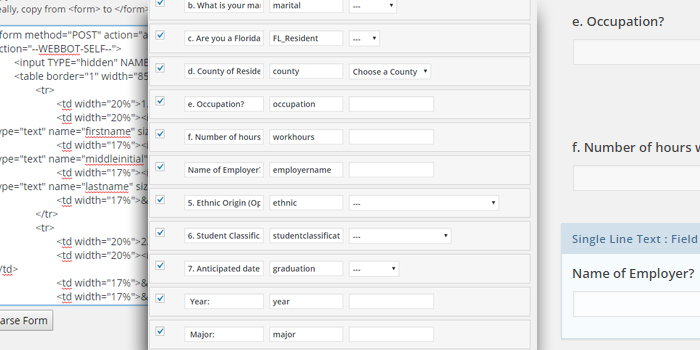 I was inspired to do this project because my job at USF Sarasota-Manatee requires moving old code over to WordPress.  We have a very large legacy site that has loads of hard coded, sloppy HTML, so moving it hasn’t been easy.  One of the worst parts is the long forms which there are still a few lingering.  So I had an idea and it is actually working.

Our system is moving to Gravity Forms.  As of now we have a mixture of google forms, hard coded forms and contact form 7 forms.  This tool should simplify centralizing them all into gravity forms big time.

In my previous post I had managed to create some results by scraping and pulling labels for the inputs that were pretty close.  I’ve formatted it into a proper plugin and at this point I’ve managed to get it importing into Gravity Forms.  Feels good, man.  Heck of a challenge, but nothing feels better than seeing your idea blossom into reality.  Feel free to take a look at the code and even try it out, it’s getting there but still a ways to go and many features to add.